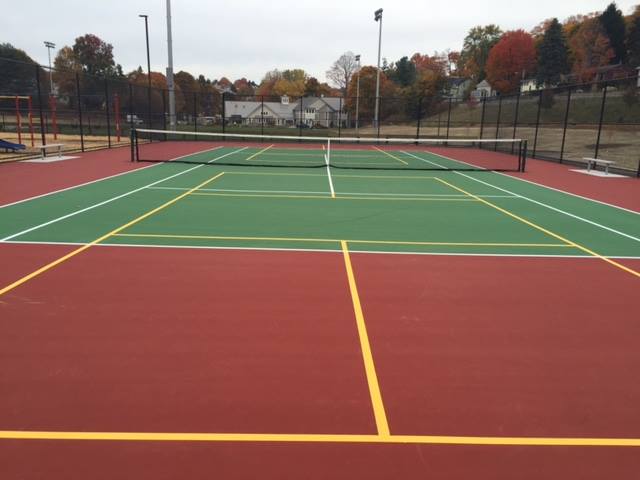 Why 10 and Under Tennis?

Under Ten tennis was developed so kids could enjoy the game of tennis. This is similar in the games of basketball with adjustable backboards. In both instances the game can actually be played by young and older people and they can have fun playing it together. 10 and Under Tennis is also ideal for individuals with disabilities or with differing abilities and circumstances. For seniors, it’s a perfect alternative to the game of Pickleball.

10 and Under Tennis is divided into two different levels — ages 8 and under and ages 10 and under — though it can be used for kids and players of all ages. It’s the fast, fun way to get kids into tennis — and to keep them playing for life.

The USTA’s 10 and Under Tennis recreational on-court training videos showcase practice plans for age groups 5-6, 7-8 and 9-10. Increase your knowledge and personal skills/drills library by engaging with these informative videos that showcase activities to get kids having fun and playing tennis right away.

Also, it’s easy to add blended lines to your facility. the process of striping 36- and 60-foot lines on a 78-foot courts

10 and Under Tennis – A Community Effort

Painting permanent lines for youth tennis 36-foot and 60-foot courts at your facility is a big step toward building and supporting a format that will change the face of youth tennis in America. These lines do not affect play for players using the traditional 78-foot court.

Converting existing courts into 10 and Under Tennis courts also creates demand for more adult courts as kids are moved onto the courts sized right for them.

Determining your equipment needs is an essential part of developing a successful 10 and Under Tennis program. Ideally, every child should come to class with his or her own kids tennis racquet.

A mix of 21-, 23- and 25-inch kids’ tennis racquets will help ensure that the appropriate racquets are being utilized for 10 and Under Tennis play. Since 23-inch racquets can be utilized for both 36-foot courts (red ball) and 60-foot courts (orange ball).

If you are working with very young children (5 and under), it is recommended to include 19-inch racquets.

Kids need a ball that is sized and paced to their playing abilities. A yellow tennis ball moves too fast, bounces too high and is too heavy for smaller racquets. Each age group uses specific kids’ tennis balls best suited to their size and playing ability.

For kids 8 and under, a red foam or low-compression red felt ball moves slower, bounces lower and travels less distance.

For 9-10-year-olds, a low-compression orange felt ball moves a little faster and travels farther than the red ball used with the younger group, but it still has a lower bounce than the yellow tennis ball.

Portable nets and throw-down lines allow organizers to create multiple 36- or 60-foot tennis courts, on a variety of surfaces, for 10 and Under Tennis play. It is recommended that you use one set of throw-down lines for every four players in your program.

You can also use tennis tape or pennant flags as an alternative to a net, as well as chalk or painter’s tape to create the lines for the court.

Our 10 and Under Tennis Programs (TAUT) introduce tennis to children based on age, physical size and ability. By modifying the court dimensions (36’or 60’ in length), equipment (appropriately sized tennis racquets and red, orange or green balls), net height and scoring system, coupled with a play component, children develop better technical and point playing skills. Please visit www.YouthTennis.com for more information about how we fit tennis to kids.

Red 1 (Ages 4-5 years; NTC rating QSTFT): Activities are focused on developing the ABCs (agility, balance, and coordination), all while forming the skills necessary to serve, rally, and score. Use of Red Foam and Felt Balls on 36’ Red Court. Offered as 1-hour or 1½-hour programs.

Red 2 (Ages 6-8 years; NTC rating QS1): Introduction to various spins on both Forehand and Backhand strokes and the different grips used. Ability to intentionally place the ball in open spaces is crucial before graduating to the next level. Typically, this is the developmental stage with the greatest duration. Red Felt Balls on 36’ Red Court. Offered as 1½-hour programs.

Orange 1 (Ages 8-10 years; NTC rating QS2): Players utilize control, spin, and positioning to their advantage while also being able to consistently rally and cooperate with a partner. The ability to maintain proper technique during points and proficiency on serve is a necessity before graduating to the next level. Orange Balls on 60’ Orange Court.Offered as 1½-hour programs.

Green 1 (Ages 8-10 years; NTC rating QSMO): Players are beginning to determine their style of play and how it matches up with other styles. This class will incorporate both singles and doubles strategy and play. Players should be introduced to 10U Tournaments. Orange Balls on 60’ Orange Court and Green Balls on 78’ Green Court. Offered as 1½-hour programs.

Green 2—10 U Academy and Feed the Feeder (Ages 8-10 years; NTC rating QSTP): At this stage of the development pathway, players have chosen tennis as a primary sport and are actively and regularly participating in 10U tournaments. Players are now working on developing weapons in their game and implementing more advanced patterns of play. Green Balls on 78’ Green Court. Recommended at least 2 days a week at this level. Offered as a 2-hour class with ½ hour of built-in strength and conditioning. Feed the Feeder – working in conjunction with the USTA Player Development Feeder Program, this program is an invitation-only development Pathway for those 10 and Under players hoping to become a part of the Feeder program.

Below are the layouts of all three under ten courts.